As the signature sponsor of the amfAR Gala Cannes during the 75th Cannes Film Festival, Jelenew hopes to join hands with amfaAR to bring new life and new hope to HIV patients

CANNES, France, May 29, 2022 /PRNewswire/ -- French time on the evening of May 26th, the amfAR charity dinner was held at the Hôtel du Cap-Eden-Roc in Cannes. Di Liu, the creative director of the American cycling brand Jelenew, was invited to attend as Co-Chairs. The cycling pants-dress newlook which Jelenew and Stéphane Rolland co-created for amfAR, also with Oscar de la Renta, Loewe, Louis Vuitton, Louis Vuitton Homme, Givenchy, Gucci, Chanel, Saint Laurent, De Fursac, Balenciaga, Fendi, Tom Ford, Jacquemus, Valentino, Giambattista Valli, Armani, Burberry, Versace, Monot, Nensi Dojaka, Dior and many other masterpieces of top brands appeared together in the annual fashion show "Let's get married" hosted by Carine Roitfeld. It is reported that this is the first time that a professional cycling brand has appeared on the amfAR show. These works will then be part of an auction led by legendary auctioneer Simon de Pury to raise money for amfAR and contribute to the global fight against AIDS. In an interview at the end of the event, Di Liu said that he was proud of Jelenew to become the signature sponsor of amfAR, and Jelenew would continue to support and participate in more charitable causes. 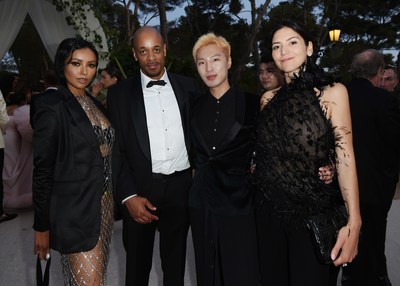 The dinner kicked off with an opening musical performance by Ricky Martin. The world's top models appeared on the runway wearing top-notch fashion, including the Jelenew X Stéphane Rolland cycling pants-dress newlook, which Jelenew and Stéphane Rolland co-created for amfAR.With other coutures , they were auctioned for $860,000, and the proceeds from the auction will be used for charity, contributing to the global fight against AIDS.

At the scene, celebrities on the stage showed interest in Jelenew and Di Liu. Nina Dobrev, Nicole Ari Parker, Boris Kodjoe, Kat Graham, martin ngongo，Schanel Bakkouche, and others communicated with Liu Di, and the topics of charity, cycling, art, and fashion became hot topics for each other.

The media interviewed Di Liu after the event. He said, "On behalf of Jelenew, I would like to thank amfAR for the invitation, and I am honored to be the signature sponsor of amfAR. Jelenew has always been concerned about women's health and hopes to help more. People in need. We will allow the cause of the Foundation for AIDS Research through this event and help AIDS people. The name of Jelenew means to give this world something new, and we hope to bring new life and new hope to HIV patients with amfAR. "

amfAR has officially approved Jelenew's charitable activities. They spontaneously posted an article on the official Instagram account :"We are thrilled to have the support of Jelenew, Signature Sponsor of arfAR Cannes.This event would not be possible without Jelenew's generosity, who has also donated an auction lot to support amfAR's mission to CureAIDS."

As a pioneer and challenger in the professional cycling clothing industry, Jelenew has focused on solving a series of clothing and equipment problems in professional cycling for women since its inception and is committed to providing women with "sports functionalism, comfort, three-dimensional structure aesthetics" perfect combination of riding products. The driving force behind Jelenew's 1+1 model cycling shorts with external pads (i.e., one pair of tight-fitting leggings + 1 detachable outer padded cycling shorts with a protection pad) begins with the brand's focus on women's health. The brand also cares about and supports charity and public welfare and hopes that in the following brand career, through the power of brand and design, more people will be involved in it to speak out for love and make love come true.

Jelenew is an American avant-garde cycling brand born for women. It creates the first cycling pants truly made for women in the world. It brings the groundbreaking combination of "Haute Couture and Sportswear" and carefully designs each product with "luxury moulage technique" to provide a more refined sports experience and promote a healthy lifestyle for cyclists to enjoy elegant and stylish suburban cycling.

About amfAR and amfAR Gala

amfAR, The Foundation for AIDS Research, is one of the world's leading nonprofit organizations dedicated to the support of AIDS research, HIV prevention, treatment education, and advocacy. Since 1985, amfAR has invested nearly $617 million in its programs and has awarded more than 3,500 grants to research teams worldwide.