Zach has been on multiple fishing circuits for the last 8 years. Starting in 2012 he partnered with his father fishing in the Master Walleye Circuit fishing that till 2017, qualifying for the championship in 3 of those 5 years. After the 2017 season he moved to the Cabela’s National Walleye tour. In his first year he finished in the Top ten at the National Walleye tour on Devils Lake following that up with a 1st Place finish on Lake Winnebago in 2019. In 2021 you can catch Zach fishing the Professional Walleye Tour at Head2Head Fishing.

Not only has Zach spent his time on the Professional Tours but has also spent his time fishing in fundraising and charity tournaments such as the ALS Charity Fishing tournament and Fishing has No Boundaries. Beyond this, Kids fishing clinics such as the NPAA & North Dakota Game and Fish kids festival are also a passion of his to not only pass on his love for fishing but teaching kids the right way to do it so that fishing stays sustainable for years to come.

Ten years ago began a vision to produce a series of videos that teaches fisherman, of all levels of experience, how to catch more and bigger fish. The first secret was 39 seconds long covering ice safety. Today these {Secrets” include captivating underwater footage that highlight valuable tools and techniques aimed at making the viewer a better overall outdoorsman, not just a better fisherman. In keeping the “secrets” short and memorable, we are giving both the novice and the accomplished angler a fin, practical education. The success of the “Secrets” has led to additional projects including sport show and tournament advertising and reports for the Angling Buzz website and television show. The Secrets to Fishing is a pilot television season that continues in our goal to teach people how to fish.

Photos from the 2020 KX Sport Show

"Fishing with Props" Presented by Missouri Secrets Tackle: Long before anglers started using spinners, propellers were used to lure fish. Fishing with Props covers the history of the simple, yet unique tool that catches more and bigger fish. We'll talk about all the secrets that we've learned and share with you how you can effectively fish with props. The focus will be on walleye fishing but will also cover other species like bass, trout and pike.

A pattern shift just in time for the weekend

Someone You Should Know: Max native, award-winning author back in ND working on sixth novel

Above normal temps highlight the forecast

A messy morning and afternoon commute 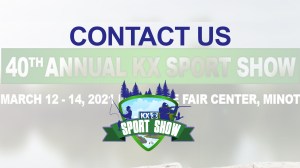