DIVIDE COUNTY, N.D. (KXNET) — We often hear that there are more important things in life than winning and losing.

Proof of that is one football player, whose life was saved by first responders underneath the Friday night lights.

In the middle of the third quarter, the Divide County Football team was regrouping to set up for a play.

On the way into the huddle, Ole Svangstu collapsed and went into cardiac arrest.

As panic set in throughout the stadium, the Surrey Ambulance, the Trinity sports medicine team, and a retired Minot paramedic sitting in the stands, immediately responded.

“We rolled the patient over and sports medicine assisted in helping to get the helmet and the pads off. The firemen had the AED, and they were doing compressions and applying that, and I went through the normal CPR routine with the AED. It did deliver a shock and the young man shortly after that responded,” said Marcy Kuhnhenn Clinic Analyst and paramedic for the Minot Ambulance.

Ole was flown to the ICU at Trinity Hospital in Minot and later to the Mayo Pediatric ICU.

KX News spoke with his father who said in a statement on Facebook, “The outcome would have been very different if he hadn’t been that close to an available AED and the people God placed there.”

After running numerous tests, the Mayo Clinic determined Ole has an extra pathway in his heart that allows electrical activity to travel in both directions.. causing cardiac arrest.

Kuhnhenn says that this should serve as a message to everyone.

“Whether you’re a parent, a coach, a teacher, a businessperson, take your CPR classes, know where your AEDs are. If you’re a businessman, if you can, get an AED. Have your Employees know CPR. Because this could happen anywhere at any time. And evidence-based medicine says that by standard CPR that can be provided right away, the AED delivered early on, is a huge factor in the survival of these people that collapse on the scene,” explained Kuhnhenn.

Ole received surgery to remove the pathway that caused his cardiac arrest and is now home recovering in Divide County with his family.

His parents want to thank everyone for the outpouring of support, prayers, and well wishes that have come their way.

The outcome of this situation is a testament to the camaraderie of a community that looks out for one another.

The Divide County School District members are holding a benefit auction on Saturday to raise funds for his family. 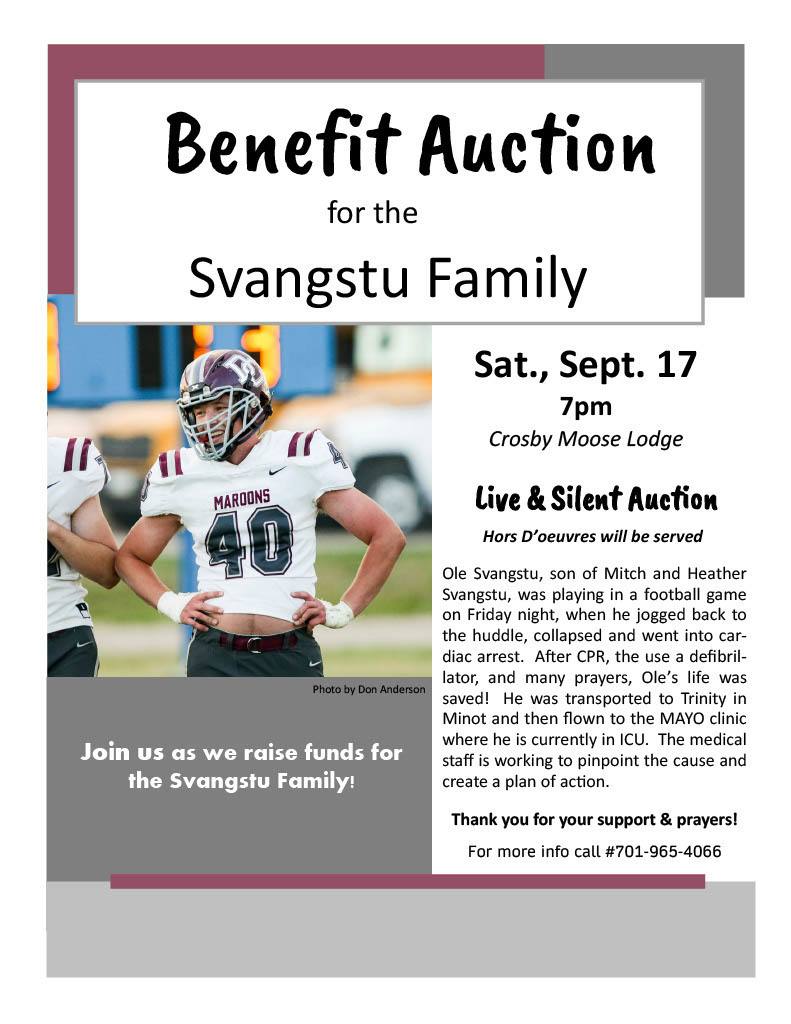 Plays of the Week – October 2

3-on-3 basketball tournament for adaptive athletes

Donate to those effected by Hurricane Ian

Golf: Majettes and Sentinels preparing for the state …

Plays of the Week – October 2

Numerous books are set in North Dakota. Here’s a …

Here are Doug Burgum’s past jobs before governor

Trial to begin for man accused of killing 22 elderly …

SCOTUS to hear case that could impact water quality

One parent worried about the school bus schedule

What BPD says you can do about local car vandalism

The Norsk Høstfest returns after a two year hiatus

Numerous books are set in North Dakota. Here’s a …

SUBMIT YOUR CLASS RECITING THE PLEDGE OF ALLEGIANCE