MINOT, N.D. (KXNET) — A family has escaped serious injuries after a vehicle smashed through their house and into their son’s nursery.

After the hit and run incident, the community came together to restore the damage at the Niess’s home in just one day.

In the early hours of Monday morning on Valley Street in Minot, a man driving an SUV crashed into the Niess’s home, inches away from where their nine-month-old son, Jaxson, was sleeping.

“At like 2:30 in the morning we just hear just a giant crash, and we didn’t know what it was, and then a second later we hear him start screaming,” said Mikhaila Niess.

Mikhaila rushed to her son’s crib and found he was okay.

That’s when she started to understand and see what had happened.

“A few neighbors I guess had heard too and came out, and saw what had happened. And so, I opened the front door and there was a car where my porch was,” said Niess.

The vehicle was going so fast that when it hit the retaining wall at the front of the house, it flew through the air and into the house, never touching the grass in the front yard.

Some of the incident was caught on the Niess’s and neighbor’s security cameras.

“The camera caught the end of it happening. And they see the guy getting out of the car, kind of like groaning and leaning over, and he actually asked if we were okay inside. And then he just leaves,” said Niess.

Firefighters say it was a miracle that baby Jaxson wasn’t hurt. And Mikhaila and her husband are just happy that their entire family is safe after the incident.

“I just remember saying oh my god over and over again. Like what do I do now,” Niess added.

The damage was overwhelming, but something wonderful happened.

Friends, family, and neighbors came together to fix all of the damage to the home in just 24 hours.

Niess said, “Family members came over right away, neighbors kept coming over and checking on us, and everyone just kind of cleaned everything up really fast and then boarded up the house so we could stay here.”

Mikhaila says she doesn’t know what she would have done if it wasn’t for the community’s help.

She says she is forever thankful that her family and her house are now safe.

Police were able to identify the driver through the security camera footage and items in the vehicle.

But he ran from the scene and the police still have not found him. 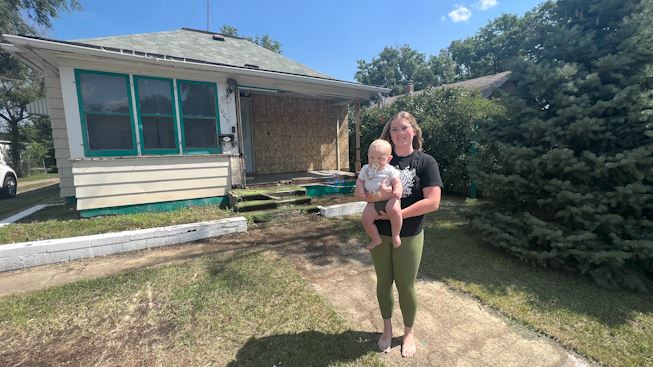 Nikki Entzel guilty on all charges in murder trial

Donate to those effected by Hurricane Ian

Golf: Class A State Tournament wraps up day one with …

Soccer: Bismarck prepares for another appearance …

After the Whistle: Cloud 9 Wrestling returns to Minot

After the Whistle: FNF Athlete of the Week Tyson …

Thrift Shops prove to be a booming business

Oct. is Influenza Prevention Month, get your flu …

The ‘most popular’ Halloween candies, by state

Gas prices in some ND counties above national average

Tropical depression forecast to fizzle out

WATCH: Rescuers flock together to save 275 parrots …

Texas inmate who fought prayer, touch rules to be …

Gas prices in some ND counties above national average

SUBMIT YOUR CLASS RECITING THE PLEDGE OF ALLEGIANCE